Markets are balanced on a knife’s edge waiting for Wednesday’s Federal Reserve monetary policy decision, but the gold market has moved beyond just the scope of U.S. monetary policy, according to one analyst.

Stephen Innes, head of trading and market strategy at Vanguard Markets, wrote in a commentary for FX Street that he expects gold prices to continue to push higher regardless of what the U.S. central bank says.

“While the prospect of lower U.S. rates and dovish Fed expectations remain supportive, gold’s  appeal goes well beyond that and is moving higher on its own accord as a safe and inexpensive hedge against the abundance of tail risks rapidly wagging,” he said in the commentary.

Innes said the threat of escalating trade tariffs remains the biggest threat to the U.S. and global economies and will continue to support gold prices ahead of Group of 20 meeting on the weekend.

“We remain unsure how the Fed will react this week, but we do know that if tariffs escalate, it will be a potent threat to U.S. growth and so the likelihood of an aggressive Fed cut will also rise. Gold represents insurance against those risks,” he said.

He added that growing geopolitical risks in the Middle East will also be supportive for gold prices in the near-term.

The third bullish factor for gold is continued central bank demand, Innes said, adding that this sector is a consistent pillar of support.

“Given the move to de-dollarize reserve, this demand will likely continue especially with trade war and the geopolitical risk abound,” he said.

Although there is some investor disappointment that gold has not pushed higher after Friday’s initial break above $1,350, Innes said that the yellow metal’s performance was still solid.

While down from Friday’s 14-month high, the gold market is holding on to most of its gains since the start of the month. August gold futures last traded at $1,344.40 an ounce, relatively unchanged on the day. 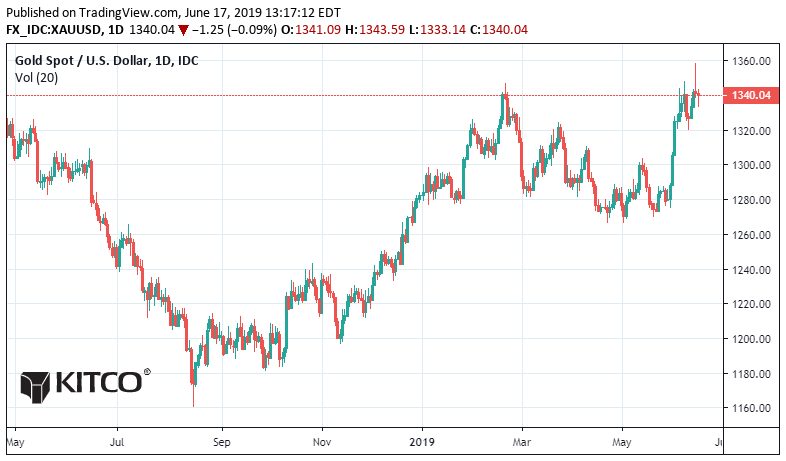 “We view any pause or pullback–even as shallow as they may be–as an opportunity to buy,” he said. “I remain unwaveringly bullish on gold and continue to buy as it remains one of my highest conviction trades into 2020.”